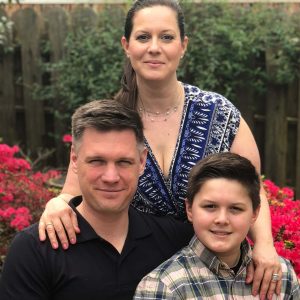 A few months ago, I featured the lovely family – Genevieve, David and their son Lawrence. They had purchased a 1938 Colonial in Cranford in September 2018. The home had “great bones” but needed modernization and this family wanted to add their own personal touch! Genevieve, when she isn’t working as Director of Health and Beauty at Whole Foods – has a passion for cooking and needed a kitchen and dining area to accommodate the entertaining of large crowds. David plays the guitar with multiple music groups in town and needed a space to practice. Then Lawrence had spotted the potential in that “teen room” in the third-floor attic space right away! Everyone had a vision for this new house and work started happening very quickly!

The family ultimately chose Magnolia Home Remodeling out of Union, NJ and couldn’t have been happier with their decision. After discussing plans, the anticipated move-in date was the end of January. If you can remember, they found unexpected costs after the chimney and boiler inspections – so those big-ticket items had to be dealt with first. Genevieve and David also handled the asbestos removal. Once all of those large projects were finished – they could finally start the demolition. They layered in other projects along the way such as their screened porch and garage.

The basement was the first project on the list. Originally, it was very dark, covered with asbestos tiles, and had layers upon layers of paint. They refinished everything, opened up the ceiling, and exposed the beams. David loves his new music/rehearsal/jam space for his band friends!

On to the kitchen!!

The major work was completely gutting the kitchen. The original kitchen was pink countertops with wood laminate cabinets. Genevieve indicated that they had learned their biggest renovation lesson during their big kitchen project! Genevieve noted, “When you design a space and then do the demolition work, you see the space finally and may have to change the original design based on the flow and layout that is now before you!”

Before the walls came down, Genevieve didn’t think they could have a large kitchen island and would have to forgo some of the space she wanted in the kitchen. However…

“We had to change our idea ultimately. After the kitchen was gutted, we saw the steps of the second floor in the kitchen – and you can’t demo that! David came up with the idea of putting the fridge in that location to take up the empty space. Then that left the entire length of the wall open! We were able to put in a full island and a wall of pantry cabinets! It ended up being so wonderful because we didn’t have a lot of cabinet space to start with. We now have PLENTY of space, the island is a great workspace with tons of storage below, and we even added a breakfast space to the bar area – complete with bar fridge and wine storage!”

Genevieve just had her first big family dinner this past Sunday and she was so happy that everyone fit! She loved every minute!

Surprises along the way…

Of course, there isn’t one home renovation that doesn’t have a few hiccups along the way. For Genevieve and David – these didn’t prove to be challenges at all but merely changed the course of their design aesthetic. 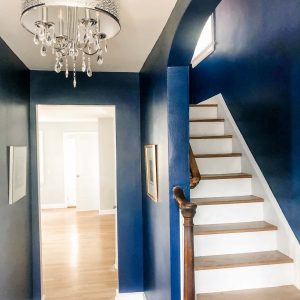 Genevieve commented that one of the surprises was finding the original hard wood floors under the tile of the foyer. Originally, they thought they would have to match the tile in the foyer with the tile in the kitchen to bring the two rooms together. Magnolia’s foreman was the one who thought there would be hardwood underneath and they were so happy that he was right! The beautiful wood underneath was in perfect condition and matched the living room flooring. They floated the wood into the kitchen and made everything on the first floor one, cohesive design! Genevieve added that the she and David decided to paint the foyer a deep, navy blue and also painted the radiators on that floor the same color. They both love the warm feeling of the wood and the grey and blue hues look amazing with pops of color!

Their kitchen countertop was another adventure! Genevieve and David had first chosen a countertop. Once the kitchen cabinets were installed and the countertop was ready to be placed -they found out that their original choice was spec ordered and not in stock anymore! They switched their choice to a matte concrete countertop. Genevieve commented – “It looks like watercolor and ended up being a change that was meant to be!” She loves the shaker style white cabinets combined with the grey concrete with a hint of blue!

And then that bathroom…

“Since we only had one full bathroom – we had to make it work for our family. The current shower was very small and just wouldn’t work for my 6’4 husband!” commented Genevieve. They began the remodel and it was a bit challenging.

“We wanted to make sure we were staying true to the age of the home – an 80-year-old colonial. We weren’t in love with the tile selections for the bathroom. We weren’t finding anything and felt that maybe we weren’t going in the right direction – my instinct has to kick in. We ended up finding this gorgeous ceramic tile that looks like shades of grey wood. The problem was that it wasn’t back in stock till the end of January! We had to go back and see if there was anything similar. Meanwhile, the manager called around the country and found an entire lot in Texas! We were so excited! But then the lot ended up being shipped to the store on Rt. 22 and not the home. The girl at the store literally piled the tile in her minivan and drove it to our house! Then, the tile ended up being laid the opposite way we had desired! I was so scared to see what it looked like. It ended up looking amazing and better than the first way I had it configured!”

“As you can see, all the changes that occurred made the design better, turned out for the best, or made us push more in our design process! The lesson learned was that that design is constantly evolving and to never be afraid to change your mind about something – constantly have conversations about what is transpiring!”

“Our son ended up loving his new teen room on the third floor! We added height to the ceiling, installed recessed lighting, new sheetrock, and carpeting. It is pretty epic! My son might have the best room in the house! We recently had a Super Bowl party and he had a sleepover in that space! Everyone loves that attic room!

“I hear from so many friends their horror stories with their contractor. I just have to give a shout out to Magnolia Home Remodeling. Their integrity is some of the best I’ve seen in the industry. They finish the project on time! Chris from Magnolia hung out with us and helped with the final projects to make sure our list was done! He will keep coming back to make sure everything is perfect. I would tell other home remodelers that they should really do their research on their contractor and make sure that contractor comes with high reviews. This decision will make or break your renovation project and they absolutely have to respect your timeline!”