A House with a History– Meet Cranford’s Iconic “Stonehedge” 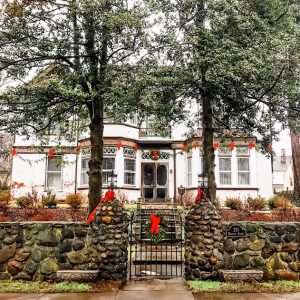 Named for the stone wall that runs around the borders of the original estate property, “Stonehedge” stood as “the ideal country home” at 211 Hampton Street in Cranford (we hear the address has changed over time and was originally 319 Hampton Street)  from its creation in 1903 – till it became “The Southern Club” sometime in the 1950s – and now back again as a private residence. I had the honor of walking the hallways of Cranford’s Stonehedge and meeting the lovely owners, Steve and Nancy Price who claim that “we don’t own the home – the home owns us!”

I have photographed this home so many times as I often drive through town, documenting the charm of Cranford on my Instagram page. Around the holidays, I posted another picture of Stonehedge all decorated with trimmings and asked if anyone knew the history of the home in my post. I mean – it just fascinated and mesmerized me! The stone wall, the black iron gate with the name “Guyers”, the stately appearance. I KNEW it held a thousand secrets, memories of epic parties, and so much more! I just had to know its history!

Thank you to all the Cranford residents (including Cranford Radio) who reached out and had Nancy and Steve contact me! They shared the exact history of the home (below) and it’s just as wonderful as I had imagined. First read the excerpt below – then learn how Steve and Nancy brought 211 Hampton St. back to life again – in all her glory!

The history of Cranford’s Stonehedge 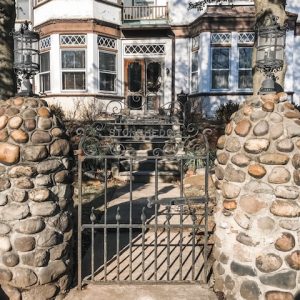 Stonehedge is named for the stone wall that runs around the borders of the original estate property (now subdivided into four properties). The name appears on the front gate along with the family name of previous owners, The Guyers. Construction on the home began in the fall of 1902 and was completed in May 1903. It was originally the home of Eustace B. and Elsie Power and their children, Phillip and Violet.

The exterior of Stonehedge in Cranford is done in a rare late Victorian style that is a takeoff on the Queen Anne. It was built with red brick and blue stone accents on the first floor, with stucco curved out over wide woodwork on the second floor and half timbers in the gables.

The interior begins with a large reception foyer in the Tudor style that features dark stained wainscoting, gothic arches, and ornate hand carved wooden frieze around the room. There are two hand carved works of art depicting scenes from ancient Greece set in the walls, hand carved newel posts and barley twist spindles up to the third floor, a turret with a window seat and plaster crown and ceiling moldings. The woodwork throughout the house is American Chestnut, which is now extinct.

The formal dining room, the most original room in the house, has recessed panel woodwork around the room, a bayed-out window wall, a large fireplace, a plaster ceiling medallion and plaster crown and ceiling moldings to create the image of a dome.

It all started with the Powers family

Eustace Bertram Le Poer Power came to this country from England in 1891. His mother was English and his father Irish, accounting for the style of the house. Elsie Hanson Power was born in China to Swedish parents. She came to America in 1888. Both were naturalized citizens. The couple was just 30 and 29 years old, respectively, when they built the home.

Eustace worked for a stamp collecting company that was a division of Stanley Gibbons, Inc., a British firm that still exists today. He worked at their NYC offices at 198 Broadway. Mr. Power authored books about stamp collecting published by Stanley Gibbons, Inc. – some of which were written during the time period when he lived at the home. (Steve found his stamp books on Ebay – inscribed by him in 1909 and 1917 –the  time period when they lived here)

Mr. and Mrs. Power sold the house in 1918 when their son, Phillip, was returning as a veteran of World War 1. His name is actually on the WWI monument in Memorial Park on Springfield Avenue.

The second owners: The Blakes 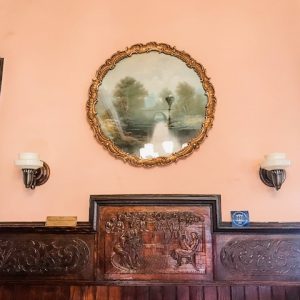 Around 1923, a large addition was built on the house by its second owners Luther and Rae Blake. The front porch was removed and the red brick on the first floor acquired a coat of white paint to give it more of a 1920’s Tudor appearance. Five of the original ten fireplaces were taken out, with five fireplaces in the house today. What had originally been two Victorian parlors were opened up into one large living room – a change which became popular after the First World War.

The living room features picture frame molding and chair rail molding, a bayed-out window wall and a fireplace on the center wall of the bay with a very large mirror on the opposite wall. French doors, which overlook that side of the house, were put in the living room which originally led to a glass room that was the first floor of the 1920’s addition (now gone). Above was a large bedroom, with attic on the third floor. Much of the interior of the glass room was imported from England. That addition was demolished 70 years later in 1993.

The Sykes, the Guyers… and the Southern Club!

In the 1930’s and 1940’s, Cranford’s Stonehedge was owned by Fred Sykes, a newspaper writer for the old New York World- who was also prominent in local politics and civics. Mr. and Mrs. Sykes allowed the house to be used during World War II by the Red Cross as a site for rolling bandages for the war effort. After the war, Stonehedge was sold to the Guyer Family, whose name is still on the front gate along with the home’s name. 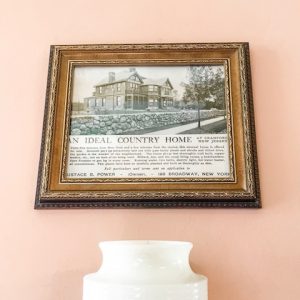 Sometime after the untimely death of her husband in a plane crash, Violet Guyer turned the home into a men’s club that was known as “The Southern Club”.

Young men from well-to-do southern families would travel north to attend engineering schools and live at The Southern Club. They would then go to work for firms such as Standard Oil after graduation. The Southern Club was the site of many parties and weddings – where white-gloved attendants served mint juleps to well-dressed southern gentlemen and their guests!

After The Southern Club had passed its heyday and fell into decline, Mrs. Guyer sold the house to private owners. Cranford’s Stonehedge has again been a private residence for more than 45 years and is now back to the original size it was when it was first built. 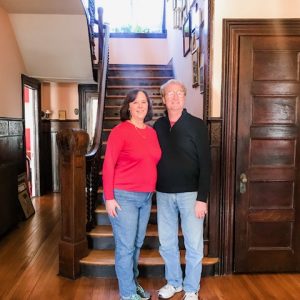 The home’s current owners are Steve and Nancy Price and they have made it their life-long project to restore the home to its original Victorian grandeur.

Steve is in school programs at the Metropolitan Museum of Art and teaches in the World History program at Kean University as an adjunct professor. Nancy is an IT Project Manager and Business Analyst in the financial industry. They served five years as co-chairs of the Crane-Phillips House Museum and managed the restoration project on that National Register site during that time. Steve and Nancy are also members of Cranford’s Historic Preservation Advisory Board. 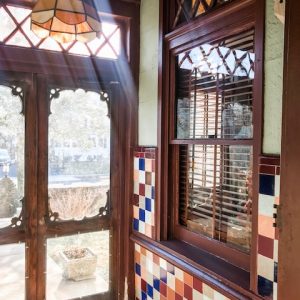 Steve and Nancy met at Pace University Manhattan.  They were married in 1981 and in 1997 they were living in Old Bridge with their young children. When Steve’s mother passed in that town -they realized they were no longer bound to that place and decided to move to a location closer to work in the city.

They came north looking for old houses and a train station. Nancy relayed they wanted a true neighborhood feel with the convenience of walking to the train, church, restaurants, and shops. They fell in love with Cranford and Stonehedge was the very first house they saw. “We walked in the foyer and said ‘Wow!’ – which is pretty much the first thing everyone says when they walk in here!” commented Steve. “We just laid on the ground and admired all the grandeur in the foyer – it’s really what sold us!” mentioned Nancy. “We pretty much took a leap of faith because this was such a great house!”

Steve and Nancy bought Cranford’s Stonehedge in 1997 at 4500 square feet, the property already subdivided, 1970s burnt orange shag everywhere, large stucco stalactites hanging from the ceiling, and two of the largest twisted beech trees in the state standing proudly standing outside the home. 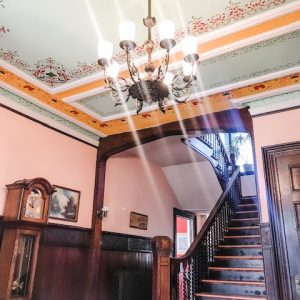 They have meticulously brought Stonehedge back to life and have kept true to the era of the home. From the wallpaper, to the window treatments, to the décor throughout the home – Nancy and Steve have mastered perfection.

I also said “wow” when I walked inside! The dining room remains mostly original to the home. They had hired a stencil artist to do the ceiling of the foyer. A lot of research had been done to help guide the artist and do appropriate design and color palette. The tile in the vestibule had been painted over and there were layers of commercial carpeting. Steve found the 1923 remodel tiling after stripping off layers and layers of paint. They tore up all the carpeting to expose the original hardwood floors. The stone planters outside by the gate have remained throughout all the owners since the home was first built!

Nancy and Steve’s children were 4 and 9 years old at the time and just had a heyday in the home, riding through the rooms on their ride-ons! Nancy indicted that their daughter was convinced the house had a secret passageway after reading Nancy Drew and the Hidden Staircase! All three of their children would grow up in Stonehedge and have the best time with their friends. “We had lots of good times, parties, and memories – this was THE house to be in on a Friday night!” commented Nancy.

A lifetime project, but it keeps giving and giving

Now that their children are older and moved out – Steve and Nancy aren’t even thinking of leaving Stonehedge. “It’s a lifetime project”, stated Steve. Next up is painting the exterior of the house!

Stonehedge is a house with a history and it just keeps giving and giving! This story is one of the reasons why I just love Cranford. All these gorgeous homes – rich in architectural detail and full of memories and stories. Do you have a home with a history? Let me know if you want to be featured in our next article!!